Clarke and the space elevator 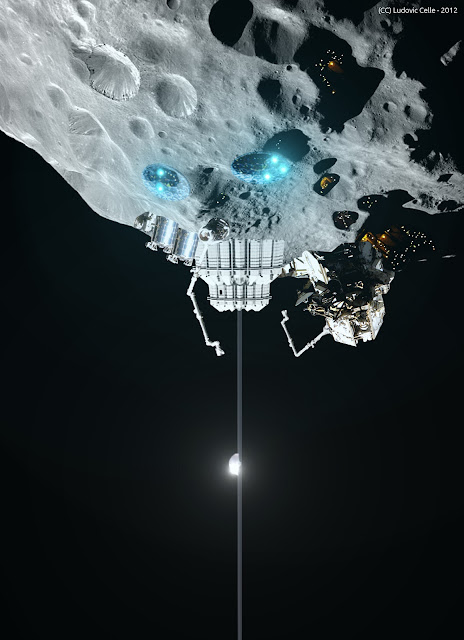 I go on with the Space Elevator theme, with this new photomanipulation showing the "space end" of the cable. In Red Mars, Kim Stanley Robinson tells the setting of an asteroid in high martian orbit, as a necessary mass keeping the space elevator cable straight. This asteroid, Clarke, is named after science fiction writer Arthur C. Clarke, who described the space elevator concept in one of his novels. (learn more here) KSR imagines that the cable is made directly from Clarke, with the asteroid's material, mined and turned in carbon nanotubes, made in space !
This photomanipulation works with the previous one, that showed Sheffield, the town where the cable rises from the surface of Mars. KSR describes the cable as being 35.000 km long and 10m thick.
More than just a useful mass for the cable's balance, Clarke is a base in itself, a spaceport full of docks, living and working areas for the people involved in space travel, space cargos as well as a spacious station for travellers of all kinds. What we don't see in the picture are the spaceships waiting for passengers leaving Mars or bringing new ones to Mars.
For the manipulation, I've used elements from a photo of the ISS by NASA, and a shot of Saturn's moon Phoebe for the asteroid (photo). The entrance of the cable is a small part of a photo of Kuala Lumpur's skyscrapers by Paul Mannix (original photo).
I made this picture with GIMP on Linux-Ubuntu.
Publié par Ludo à 21:56