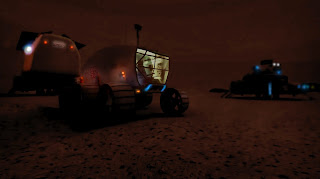 Mars500 experiment which took end on november 2011 was a simulation of 520 days alone for a crew of 6 men on a travel to Mars and back. The isolation reproduced most of the situations of inside the ship while the "outside scale" was recreated through a virtual reality software, with a view on the take off, the travel, the landing and works on Mars, and then the travel back home.
To know more about this virtual reality simulator made by NVidia and JCSI Group (Russia), check this page of NVidia, of see this Russian site with footage from the software.
And as usual on DaVinci, let's have a look at the visuals ! We here have a pressurized rover leaving its dock, a large digger, and 4 shots of the take off from Mars. I personally love the render of the orbital sequence, very immersive with its wide angle.
The top picture is a quick personal improvement of one of the shots. I've reached this night effect with TheGimp.